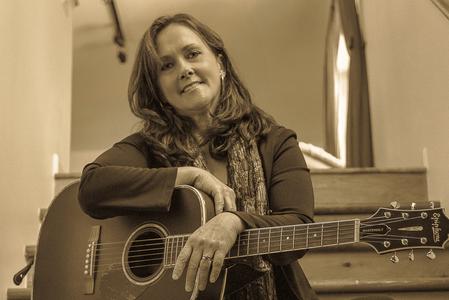 Liz Barnez was born in New Orleans, Louisiana and grew up inspired by jazz, blues, folk, gospel, R&B, Dixieland, funk, and parade music. She embraced the diversity of her musical and creative upbringing and transformed those into her own eclectic style of music.

While attending the University of New Orleans, Liz’s career began as a singer in a “Big Band” and in a variety of pop covers bands that performed in the French Quarter including many Bourbon Street musical landmarks. During this time, Liz started playing the guitar and began writing her own songs. Her friend, drummer Steve Amedee, introduced her to the rich original music scene in uptown New Orleans.  Amedee was also a member of the newly formed band, the subdudes. Liz was inspired by their sound and their commitment to songwriting. When the subdudes moved to Colorado in 1987 – finding a very supportive music scene in which to develop their sound – Barnez followed.

By the end of 1988, Barnez had recorded her first demo tape of original music with Amedee, John Magnie, Tommy Malone, and Tim Cook of the subdudes, and Joe Cabral (now of the Iguanas), and Colorado’s love affair with her music began. Her song, “Easy Life” was placed on regular rotation on the powerful, regional radio station in Boulder, KBCO, where she also recorded a “Studio C” show. Her recording of “Don’t Worry” was placed on the 2nd “Live from Studio C” CD.

The buzz about Barnez, who was now performing with her band, spread quickly and soon the band was headlining and opening for regional and national artists in premier music venues in the Rocky Mountain Region. Barnez was chosen as a semi-finalist of Musician Magazines Best Unsigned Band contest and became the grand prizewinner in the prestigious “Colorado Sound Contest” sponsored by Denver radio station KDHT. The Liz Barnez Band has twice headlined the Best of Colorado stage at the American Music Festival in Winter Park, Colorado.

Barnez recorded her first album, “Liz Barnez Band” in 1992. Colorado audiences and radio stations responded warmly to the new music, placing many of the tunes on regular rotation. In 1993, the readers of regional entertainment monthly, the Scene, voted “Northern Colorado’s Favorite Band” to the group.

While playing full-time in support of the Liz Barnez Band CD, Liz was laying the groundwork for her 2nd album, “Inkmarks on Pages”.  Self–produced by Barnez and recording engineer and guitarist David Channing, the recording would bring together not only Barnez’s friends, the subdudes, but also musicians such as popular Los Angeles based singer and pianist Tom Sullivan, famous for his work in television and motion pictures (“If You Could See What I Hear”), as well as a full roster of excellent regional talent. In anticipation of the album’s release in 1996, Barnez was asked to appear for the third time on Ace Award-winning television show “Alley Tracks.

With the release of “Inkmarks”, Liz and the band began touring the US, playing often in New Orleans. An invitation to perform at the prestigious New Orleans Jazz and Heritage Festival in 1997 and 1998 on one of the two main stages followed suit. Barnez was invited to join the Mother Folkers (the most carefully pronounced name in show business), a group comprised of Colorado’s premier women folk musicians, for their concert series in 1997 and for their 25th and final year in 1998.

In 2000, Barnez was invited to play the French Quarter Festival in New Orleans. After an enthusiastic response to her performance, she was invited back in 2001. In 2003, a new musical incarnation made up of three of the Rocky Mountain Front Range’s top female singer/songwriters was formed. Liz teamed up with Maggie Simpson and Rebecca Folsom to form Ruby. Ruby was the result of a very inspired songwriter in the round performance at the Rocky Mountain Folks Festival in Lyons, Colorado. In Ruby, Liz was able to explore her love of playing drums and percussion as well as songwriting and singing. Ruby recorded a “live in the studio” CD called “Ruby, Live at Velvet” and appeared before wildly enthusiastic audiences across the United States culminating in a repeat performance at the Folks Festival in 2004.

In 2004, Liz again teamed up with engineer/producer/guitarist, David Channing on her third full length CD. David had relocated to Los Angeles and had spent the previous 6 years as engineer for LA based producer Patrick Leonard (Elton John, Madonna, Jewel, etc.). Liz traveled to Los Angeles to work with David in his studio with some tracking at Cello Recording Studio in Hollywood. (Mick Jagger was recording at Cello at the same time with T Bone Burnett producing. Don Was, who was also working at Cello, stopped in our control room on a couple of occasions as we listened to playbacks….that was FUN!!!!)

Barnez and Channing enlisted the help of drummer, Vinnie Colliauta (Sting, Frank Zappa, Joni Mitchell, Faith Hill, etc.), her friends the subdudes, Chris Engleman, bassist for the “E Tones”, the house band for the NPR radio show “E Town”, and Patrick Leonard on keyboards. The new CD “Liz Barnez, Revealed” was released in June of 2005 and garnered favorable reviews across the country. The CD was favorably reviewed in Songwriter Magazine DIY section and was a regular on playlists of radio stations nationwide.

In September of 2005 Liz was instrumental in organizing the “Concert for the Gulf Coast”, a fundraiser for the victims of Hurricane Katrina. Liz lead the coordination of a live concert with Northern Colorado’s top bands along with a live simulcast on local radio station KRFC. This effort was a tremendous success and raised $20,000. The Bohemian Foundation of Fort Collins matched the funds and created a total of $40,000 to the Red Cross efforts in the Gulf Coast and New Orleans.

In late 2006, Liz teamed up with Rebecca Folsom and Nashville based singer/songwriter Celeste Krenz to form the trio “Faces of Eve”. Faces toured extensively in the US performing at Folk Alliance in Memphis, Kerrville Folk Festival in Texas, Lyons Folks Festival, among others. Liz relocated to Nashville in 2007 and was quickly welcomed into the songwriting community. Liz performed on several occasions at the prestigious Bluebird Café as well as 3rd and Lindsley.   Liz co-wrote and worked with many of Nashville’s most prolific songwriters in order to hone her songwriting skills.

Liz returned to Fort Collins in 2008 and continued to perform with her band as well as solo performances. The Bohemian Foundation honored Liz in 2011 by including her in a mural at “Jazz Alley” in Fort Collins. The mural, by artist Terry McNerney, depicts eight musical artists chosen by Bohemian as the founders of the Fort Collins Music Scene. Liz was awarded the "Lifetime Achievement Award" by the Fort Collins Musicians Association in 2012.

In 2014, Liz joined Boston based folk artist, Catie Curtis on her CD release tour where she accompanied Catie on cajon and harmony vocals as well as playing several of her own songs. Liz loves to write, record, and perform and will continue to do so until she is no longer physically able.

In addition to her music, Liz is devoted to serving her community and world. She volunteers much of her time and talent to organizations that support and protect women and children, the separation of church and state, as well as equal rights organizations.